Delray Beach City Commissioners voted to suspend City Manager, George Gretsas, along with a preliminary notice to terminate for cause, pending an investigation into allegations of bullying several city employees. He was subsequently charged during a quasi-judicial proceeding with engaging in “a number of instances of misconduct” that warranted his firing.

The City Manager filed suit seeking emergency relief to compel the City to produce public records he claimed were not made available in his defense; postpone his termination hearing; and require the Mayor to recuse herself.

The City of Delray Beach reached out to Jones Foster for their extensive experience and reputation in municipal law and governmental litigation, and selected Litigation Shareholder, Joanne M. O’Connor, to represent the City in the emergency complaint. Joanne was particularly well-suited to this task due to her specialized expertise, knowledge of the Florida Public Records Act (“Act”) (including recent amendments), insight into the application of the Act in light of modern technology, and experience defending mandamus actions, both before trial courts and on appeal. Joanne provided a lengthy response with affidavit at a “show cause” hearing via Zoom within days, arguing that the suit was brought for an improper purpose to delay the public hearing on his termination.

A successful outcome resulted for The City of Delray Beach, as Circuit Court Judge John Kastrenakes denied relief sought in its entirety. Specifically, Judge Kastrenakes denied mandamus and any attorney fees on public records issues, denied injunctive relief to continue the City Manager’s termination hearing, and reserved to consider the City’s claim that the suit was brought for an “improper purpose” under the Act, keeping the door open to an attorneys’ fees award. The latter was a notable and unusual ruling involving a 2017 amendment to the PRA that gives government agencies the right to seek attorneys’ fees where suits are brought for an improper purpose.

About Joanne O’Connor
Joanne O’Connor is a Jones Foster Litigation Shareholder and key member of the Firm’s Governmental Litigation team.  A Florida Bar Board Certified specialist in Business Litigation, she focuses her practice on complex commercial litigation including contracts and business torts, partnership and corporate disputes, civil RICO, real estate and land use litigation, and lawyer and law firm defense. Joanne has experience defending actions seeking certification of nationwide and statewide classes, including consumer claims brought under the federal Telephone Consumer Protection Act (TCPA). She counsels governmental entities on statutory, constitutional and civil rights claims and both governmental and private entities on Florida’s Public Records Act and Sunshine Law. Joanne is an experienced litigator who advocates for her clients in jury and non-jury trials and appeals in state and federal courts and before private arbitration panels.

About Jones Foster
Jones Foster is a commercial and private client law firm headquartered in West Palm Beach, Florida. Established in 1924, the Firm has served as an integral part of South Florida’s growth and prosperity for nearly a century. Through a relentless pursuit of excellence, Jones Foster delivers original legal solutions that help clients, colleagues, and the community to move forward. The Firm’s attorneys focus their practice in Real Estate, Litigation & Dispute Resolution, Private Wealth, Trusts & Estates, Corporate & Tax, and Land Use & Governmental. For more information, please visit www.jonesfoster.com. 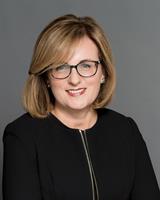