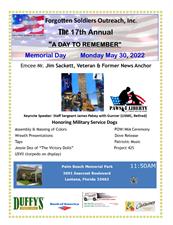 FREE TO THE PUBLIC AND THEIR SERVICE DOGS
FAMILY FRIENDLY 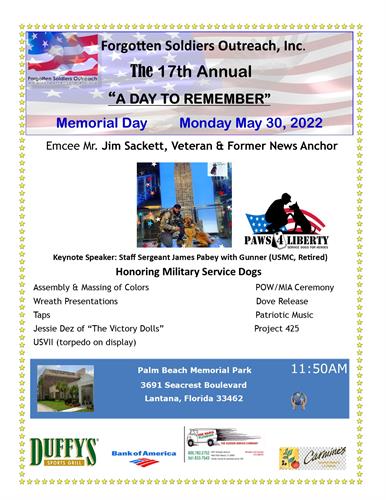 The Master of Ceremonies will again be Jim Sackett, a veteran and a local veteran newscaster, and respected Media personality.

The theme of this years’ service will be “Honoring Our Military & Service Dogs”, and will include our Keynote Speaker, Staff Sergeant James Pabey, United States Marine Corps (Ret.), with his Service Dog Gunner received from Paws 4 Liberty.

The “Greetings from the Military” will be provided by the United States Marine Corps Master Sergeant Nicholas J. Tock of the 4th ANGLICO.

There will also be the traditional Wreath presentations by local organizations and individuals, as well as a special presentation of the Wreath of Honor presented by Senior Chief Michael Forjan with his Service Dog Brixie and CPO(SW)USCG Retired Eric C.M. Lundberg with his Service Dog Belle (both recipients of Paws for Liberty).   There will also be the infamous DOVE RELEASE at the end of the ceremony.      Bottled Water sponsored by Dadios Seafood & Grill will be provided and distributed by the Boy Scouts throughout the service.   As in years past, chairs will be set up under a large tent.

There will be complimentary food and beverages immediately following the service.